skip to main | skip to sidebar

You're a good man, Mr. Hardin

Best of luck to you, too—I hope you sell your book for giant pots of money. Peace, of course. I'll be back on crimespace in a few months, most likely--see you then, I hope.
Posted by Jon Loomis at 6:01 PM 1 comment:

Just found a new online source for guitar widgets. They've got Landgraff stuff, and Tim pedals. The question is, can I deduct all the gear I've bought this year, since we played at Blues Fest?
Posted by Jon Loomis at 1:55 PM 1 comment:

Lots of smart people there, many of whom I'll miss. I enjoyed most of the conversation a great deal. I have a lot of respect for the working writers who post there, and I'm grateful to the readers who've bought and enjoyed my book(s). It's a great site and I'm glad to have been a part of it. Rock on with your fine selves. Better yet, feel free to drop by and leave a comment, if the spirit moves you.
Posted by Jon Loomis at 12:00 PM 2 comments:

I've been pretty active in the political web forum world the past few years, and what I've learned is that just about any web forum, no matter how benign its purpose or uncontroversial its subject matter, can turn ugly if negative or hostile or aggressively stupid members are allowed to dominate the conversation unchecked. When that happens you have three choices: you can ignore it, you can fight back, or you can leave. In this case I found it hard to ignore, because the hostility was hitting pretty close to home: a lot of snide remarks about academia, a lot of juvenile stereotyping of academics, a lot of chest-puffing anti-intellectualism of the Limbaugh variety (it was even suggested that I'd been "brainwashed by academia"—echoes of Horowitz, ferfuckinchrissakes). I don't really have the time or energy to engage it—too many papers to grade, little kids, copy edits due in two weeks—plus, after a year or so on crimespace I realize that such attitudes are pretty deeply ingrained: literary fiction writers get all the girls, or something. I did post a long, impassioned rant in which I said as clearly as I could that I took such attacks personally, since my wife, my father and most of my closest friends are artists, poets, lit-fic writers and/or academics, but the poo continued to fly. After another round or two, I left. It's possible that I'll sign up again when the new book is a little closer to its release date. Or, you know, not.
Posted by Jon Loomis at 7:35 AM 3 comments:

I used to have this argument with my father when I was, like, thirteen. I believed passionately that art was whatever I wanted it to be, and no one could tell me any differently. My father believed that art was something specific, and that it had rules you could both state and teach, and that those rules had largely been agreed upon in the art world since the advent of modernism. He knew what they were because he was trained to be an artist by other artists, some of whom were a pretty big deal: he went to art school on the GI Bill, first to Yale (BFA), then Cornell (MFA), where he studied with both Albers and De Kooning. He also knew his art history, as we found out in the '60s and '70s when he dragged us through every art museum in Europe. No surprise—he was right, and I was wrong. Because in order for kid-me to have been right, this would have to be art: 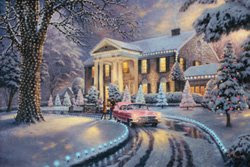 Now, if you were desperate you could make the case that "Graceland Christmas" is art, a timeless classic, even, because people like it, and if it speaks to them, who's to say they're wrong? But that would be missing the point. If that's the standard, then soap operas are art, and Judge Judy is art, and internet porn and snuff movies are art, and so on. People like all of those things, after all, and are moved by them, one way or another. So either art is a specific thing, distinct from other things, or it's everything (and therefore nothing). If the latter, there's no point in even discussing it: "art" is just a term without meaning, nothing but an empty catch-phrase for people to throw around. But of course that's not true: art is something—or some things—and not others. Artists, academics and critics have a pretty clear, more-or-less shared view of what it is and isn't, in the broadest sense, at least. It is "Guernica," for example, and it isn't "Graceland Christmas." That's not to say that there isn't some occasional blurring or blending, and that genre fiction, say, can't be both successful genre and do a lot of the stuff art does—but anybody who's worked in both literary and genre forms can tell you that there's not always a lot of room for art-making once you get the genre corset cinched up. This all seems pretty obvious to me, but I've been thinking about it for thirty-five years or so.
Posted by Jon Loomis at 12:55 PM 4 comments:

Tired of having the same stupid argument over and over about why Stephen King is not the greatest writer evah, even though he makes more money than me. Oy.
Posted by Jon Loomis at 4:48 PM 7 comments:

Good luck, America.
Posted by Jon Loomis at 9:40 AM No comments:

Jon Loomis
I'm the author of the Frank Coffin mystery series, HIGH SEASON (2007), MATING SEASON (2009) and FIRE SEASON (2012) from St. Martin's/Minotaur. I've also published three books of poems VANITAS MOTEL (1998), THE PLEASURE PRINCIPLE (2001), and The MANSION OF HAPPINESS (2016), all from Oberlin College Press. I'm currently at work on a comedic novel and a new book of poems. When I'm not writing I'm a college professor, a sort of okay guitar player, a guitar gear junkie, and a husband and father in progress.